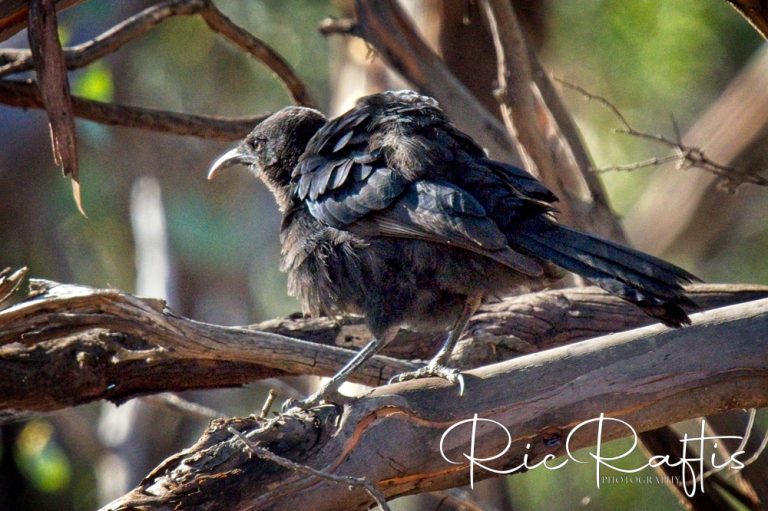 They are a bird that tend to inhabit the lower canopy areas where there is plenty of leaf litter for feeding.  They fly together is flocks of around 10 to 30 birds in my experience.  They make a rather raucous call when the alarm is raised because a threat maybe nearby.

White-winged choughs are easily recognised but often mistaken for “crows” (such as the Australian raven). The white-winged chough is a large, black bird—at about 45 cm (18 in) only a little smaller than a raven or a little larger than an Australian magpie—but has red eyes and a finer, slightly down-curved beak, similar to a European chough. These red eyes become swollen and brighter in colour when the bird is excited. In flight the large white patches in the wings are immediately obvious, and explain the descriptive part of their common name.

Their calls consist primarily of a grating alarm call and a descending piping call. The latter call is diagnostic for the bird in the wild, being significantly different in timbre and melody to that of other birds sharing their habitat.

Nesting and breeding is communal, all members of the family helping to raise the young – a process that takes several years, as young birds must learn the art of finding food in the dry Australian bush. Larger families have a better chance of breeding success: so much so that given the opportunity choughs will kidnap the youngsters of neighboring families in order to recruit them to the team.

Breeding season is from August to December. The nest is a deep cup-shaped structure made of grasses held together with mud or sometimes manure in a tree fork up to 10 metres above the ground. Three to five cream-coloured eggs sparsely splotched with dark brown and lavender shades are laid measuring 30 mm x 40 mm.

There is one report of white-winged choughs occupying and using a nest which was likely to have been built by the Australian magpie. However, this was unable to be confirmed as the nest was not witnessed being built.

All members of a family take turns to incubate, preen, and feed youngsters, and all cooperate in defending the nest against predators. However, the juveniles, who are highly inefficient foragers, have been observed to engage in deception; they bring food back to the nest and make to feed nestlings, but instead wait until unobserved, and then eat it themselves. This behaviour disappeared when food sources were artificially supplemented. There are three main threats to young choughs: starvation; predation by nest-robbing birds, particularly currawongs; and sabotage by neighbouring chough families anxious to protect their food supply by restricting competition. Larger family groups are better able to deal with all three threats.

Nesting in communal groups is essential: pairs, or even trios, of birds are almost never successful in raising young. Young take six to seven months to reach independence – a significant time-span for birds – but they repay the long investment by returning to the nest the next year and helping raise the next generation.