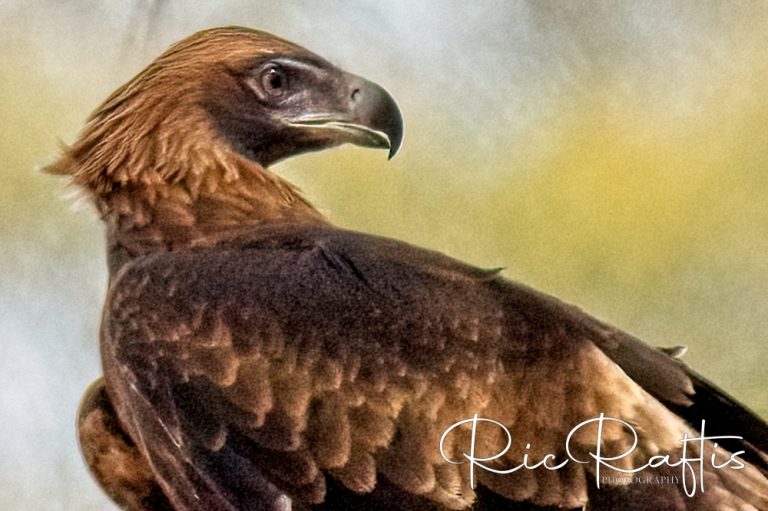 The Wedge Tailed Eagle is an iconic bird in Australia. You can often see them soaring high in the skies riding the thermals. They are magnificent to watch.

The wedge-tailed eagle (Aquila audax) is the largest bird of prey in Australia, and is also found in southern New Guinea. It has long, fairly broad wings, fully feathered legs, and an unmistakable wedge-shaped tail.
The wedge-tailed eagle is one of 12 species of large, predominantly dark-coloured booted eagles in the genus Aquila found worldwide. A large brown bird of prey, it has a wingspan up to 2.84 m (9 ft 4 in) and a length up to 1.06 m (3 ft 6 in).[2]

Wedge-tailed eagles are highly aerial, soaring for hours on end without wingbeat and seemingly without effort, regularly reaching 1,800 m (5,900 ft) and sometimes considerably higher. The purpose of soaring is unknown. Their keen eyesight extends into ultraviolet bands.

Most prey is captured on the ground in gliding attacks or (less frequently) in the air. Choice of prey is very much a matter of convenience and opportunity; since the arrival of Europeans, the introduced rabbit and brown hare have become the primary items of the eagle’s diet in many areas. Larger introduced mammals such as foxes and feral cats are also occasionally taken, while native animals such as wallabies, small kangaroos, possums, wombats, koalas, and bandicoots are also prey. In some areas, birds such as cockatoos, Australian brushturkeys, ducks, crows, ibises, and even young emus are more frequent prey items. Reptiles are less frequently taken, but can include frill-necked lizards, goannas, and brown snakes.

Carrion is a major diet item, also; wedge-tails can spot the activity of Australian ravens around a carcass from a great distance, and glide down to appropriate it. Wedge-tailed eagles are often seen by the roadside in rural Australia, feeding on animals that have been killed in collisions with vehicles.

This impressive bird of prey spends much of the day perching in trees or on rocks or similar exposed lookout sites such as cliffs from which it has a good view of its surroundings. Now and then, it takes off from its perch to fly low over its territory. During the intense heat of the middle part of the day, it often soars high in the air, circling up on the thermal currents that rise from the ground below. Each pair occupies a home range, which may extend from as little as 9 km2 (3.5 sq mi) to more than 100 km2 (39 sq mi). Within this home range lies a breeding territory around the nest. The eagle patrols the boundary of this home range and advertises its ownership with high-altitude soaring and gliding flights. It may defend its territory by diving on intruders. Adults are avian apex predators and have no natural predators, but must defend their eggs and nestlings against nest predators such as corvids, currawongs, or other wedge-tailed eagles, and in Tasmania, conflict with the white-bellied sea eagle often occurs over nest sites.

The wedge-tailed eagle is the only bird that has a reputation for attacking hang gliders and paragliders (presumably defending its territory). Cases are recorded of the birds damaging the fabric of these gliders with their talons. They have also been reported to attack and destroy unmanned aerial vehicles used for mining survey operations in Australia.

The presence of a wedge-tailed eagle often causes panic among smaller birds, and as a result, aggressive species such as magpies, butcherbirds, masked lapwings, and noisy miners aggressively mob eagles.