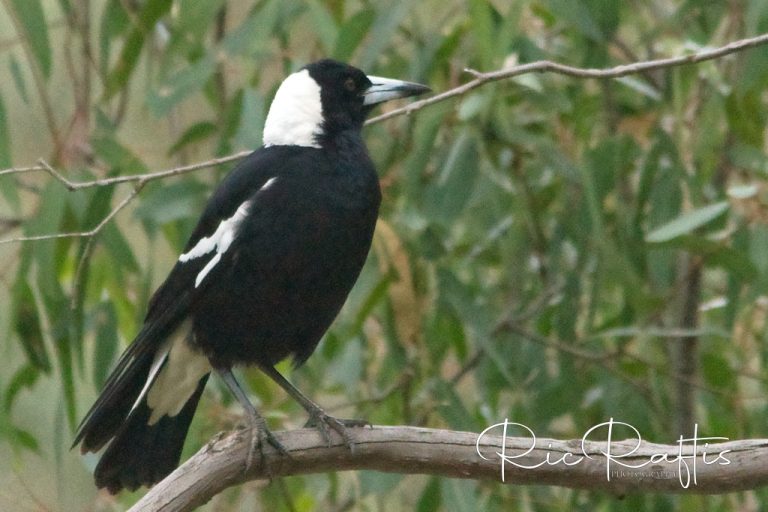 Just a bit of trivia on this species as well.  Magpies are often found in groups.  When they are, it’s called a Parliament.  One can only imagine why.

The Australian magpie (Gymnorhina tibicen) is a medium-sized black and white passerine bird native to Australia and southern New Guinea. Although once considered to be three separate species, it is now considered to be one, with nine recognised subspecies. A member of the Artamidae, the Australian magpie is placed in its own genus Gymnorhina and is most closely related to the black butcherbird (Melloria quoyi). It is not, however, closely related to the European magpie, which is a corvid.

The adult Australian magpie is a fairly robust bird ranging from 37 to 43 cm (14.5 to 17 in) in length, with distinctive black and white plumage, gold brown eyes and a solid wedge-shaped bluish-white and black bill. The male and female are similar in appearance, and can be distinguished by differences in back markings. The male has pure white feathers on the back of the head and the female has white blending to grey feathers on the back of the head. With its long legs, the Australian magpie walks rather than waddles or hops and spends much time on the ground.

Described as one of Australia’s most accomplished songbirds, the Australian magpie has an array of complex vocalisations. It is omnivorous, with the bulk of its varied diet made up of invertebrates. It is generally sedentary and territorial throughout its range. Common and widespread, it has adapted well to human habitation and is a familiar bird of parks, gardens and farmland in Australia and New Guinea. This species is commonly fed by households around the country, but in spring (and occasionally in autumn) a small minority of breeding magpies (almost always males) become aggressive, swooping and attacking those who approach their nests. Research has shown magpies can recognise at least 100 different people, and may be less likely to swoop individuals they have befriended.

The adult magpie ranges from 37 to 43 cm (14.5 to 17 in) in length with a 65–85 cm (25.5–33.5 in) wingspan, and weighing 220–350 g (7.8–12.3 oz). Its robust wedge-shaped bill is bluish-white bordered with black, with a small hook at the tip. The black legs are long and strong. The plumage is pure glossy black and white; both sexes of all subspecies have black heads, wings and underparts with white shoulders. The tail has a black terminal band. The nape is white in the male and light greyish-white in the female. Mature magpies have dull red eyes, in contrast to the yellow eyes of currawongs and white eyes of Australian ravens and crows. The main difference between the subspecies lies in the “saddle” markings on the back below the nape. Black-backed subspecies have a black saddle and white nape. White-backed subspecies have a wholly white nape and saddle. The male Western Australian subspecies dorsalis is also white-backed, but the equivalent area in the female is scalloped black.

Juveniles have lighter greys and browns amidst the starker blacks and whites of their plumage; two- or three-year-old birds of both sexes closely resemble and are difficult to distinguish from adult females. Immature birds have dark brownish eyes until around two years of age. Australian magpies generally live to around 25 years of age, though ages of up to 30 years have been recorded. The reported age of first breeding has varied according to area, but the average is between the ages of three and five years.

Well-known and easily recognisable, the Australian magpie is unlikely to be confused with any other species. The pied butcherbird has a similar build and plumage, but has white underparts unlike the former species’ black underparts. The magpie-lark is a much smaller and more delicate bird with complex and very different banded black and white plumage. Currawong species have predominantly dark plumage and heavier bills.

When alone, a magpie may make a quiet musical warbling; these complex melodious warbles or subsongs are pitched at 2–4 KHz and do not carry for long distances. These songs have been recorded up to 70 minutes in duration and are more frequent after the end of the breeding season. Pairs of magpies often take up a loud musical calling known as carolling to advertise or defend their territory; one bird initiates the call with the second (and sometimes more) joining in. Often preceded by warbling, carolling is pitched between 6 and 8 kHz and has 4–5 elements with slurring indistinct noise in between. Birds will adopt a specific posture by tilting their heads back, expanding their chests, and moving their wings backwards. A group of magpies will sing a short repetitive version of carolling just before dawn (dawn song), and at twilight after sundown (dusk song), in winter and spring. One of Australia’s most highly regarded songbirds, the Australian magpie has a wide variety of calls, many of which are complex. Pitch may vary as much as four octaves, and the bird can mimic over 35 species of native and introduced bird species, as well as dogs and horses. Magpies have even been noted to mimic human speech when living in close proximity to humans. Its complex, musical, warbling call is one of the most familiar Australian bird sounds. In Denis Glover’s poem “The Magpies”, the mature magpie’s call is described as quardle oodle ardle wardle doodle, one of the most famous lines in New Zealand poetry, and as waddle giggle gargle paddle poodle, in the children’s book Waddle Giggle Gargle by Pamela Allen. The bird has been known to mimic environmental sounds as well, including the noises made by emergency vehicles during the New South Wales wildfire state of emergency for Australian bushfire.

Fledgling and juvenile magpies emit a repeated short and loud (80 dB), high-pitched (8 kHz) begging call. Magpies may indulge in beak-clapping to warn other species of birds. They employ several high pitched (8–10 kHz) alarm or rallying calls when intruders or threats are spotted. Distinct calls have been recorded for the approach of eagles and monitor lizards.

Magpies have a long breeding season which varies in different parts of the country; in northern parts of Australia they will breed between June and September, but not commence until August or September in cooler regions, and may continue until January in some alpine areas. The nest is a bowl-shaped structure made of sticks and lined with softer material such as grass and bark. Near human habitation, synthetic material may be incorporated. Nests are built exclusively by females and generally placed high up in a tree fork, often in an exposed position.  The trees used are most commonly eucalypts, although a variety of other native trees as well as introduced pine, Crataegus, and elm have been recorded. Other bird species, such as the yellow-rumped thornbill (Acanthiza chrysorrhoa), willie wagtail (Rhipidura leucophrys), southern whiteface (Aphelocephala leucopsis), and (less commonly) noisy miner (Manorina melanocephala), often nest in the same tree as the magpie. The first two species may even locate their nest directly beneath a magpie nest, while the diminutive striated pardalote (Pardalotus striatus) has been known to make a burrow for breeding into the base of the magpie nest itself. These incursions are all tolerated by the magpies. The channel-billed cuckoo (Scythrops novaehollandiae) is a notable brood parasite in eastern Australia; magpies will raise cuckoo young, which eventually outcompete the magpie nestlings.

Individual magpies may develop a close relationship with certain humans. They may follow someone around a garden, eating invertebrates that are disturbed, or offered by the gardener. They may leave fledglings in the “care” of humans while they forage, and fledglings may show little or no fear of those humans.

The Australian magpie featured in aboriginal folklore around Australia. The Yindjibarndi people of the Pilbara in the northwest of the country used the bird as a signal for sunrise, frightening them awake with its call. They were also familiar with its highly territorial nature, and it features in a song in their Burndud, or songs of customs. It was a totem bird of the people of the Illawarra region south of Sydney.

An online poll conducted by Guardian Australia and BirdLife Australia was held in late 2017 to choose the “Australian Bird of the Year”. The Australian magpie won the contest with 19,926 votes (13.3%), narrowly ahead of the Australian white ibis.