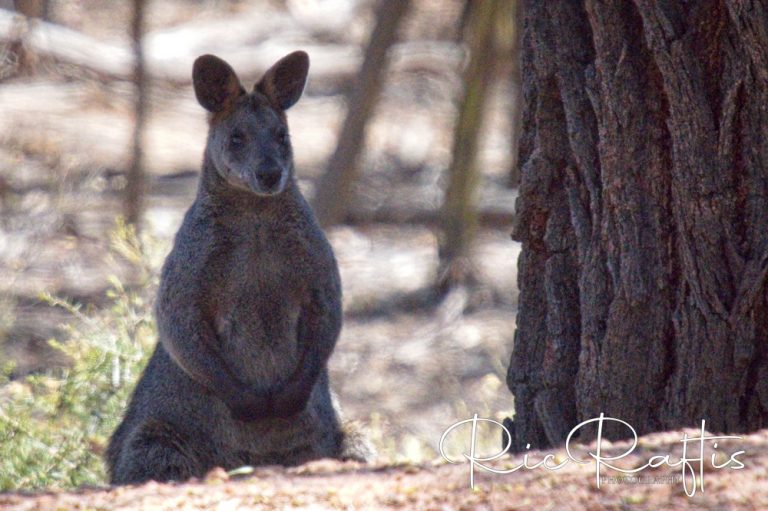 The Swamp Wallaby seems to be a bit of a misnomer to me. Locations where I have seen this marsupial couldn’t be further than a swamp. They are certainly very common in the thick bush around Wedderburn, Vic where I live.

The Swamp Wallaby is found all the way down Australia’s east coast.  Apparently it used to also be in South Australia, but is either rare or has disappeared from that area. They will often tend to sit and look at you in the bush, unlike kangaroos that bound away as soon as they are disturbed.  In the thick bush, they tend to bend very low to the ground as they twist and turn their way through the scrub.

The species name bicolor comes from the distinct colouring variation, with the typical grey coat of the macropods varied with a dark brown to black region on the back, and light yellow to rufous orange on the chest. A light coloured cheek stripe is usually present, and extremities of the body generally show a darker colouring, except for the tip of the tail, which is often white.

The gait differs from other wallabies, with the swamp wallaby carrying its head low and its tail out straight.

The swamp wallaby becomes reproductively fertile between 15 and 18 months of age, and can breed throughout the year. Gestation is from 33 to 38 days, leading to a single young. The young is carried in the pouch for 8 to 9 months, but will continue to suckle until about 15 months.

The swamp wallaby exhibits an unusual form of embryonic diapause, differing from other marsupials in having its gestation period longer than its oestrous cycle. This timing makes it possible for swamp wallaby females to overlap two pregnancies, gestating both an embryo and a foetus at the same time. The swamp wallaby ovulates, mates, conceives and forms a new embryo one to two days before the birth of their full-term foetus. Consequently, females are continuously pregnant throughout their reproductive life.

The swamp wallaby is typically a solitary animal, but often aggregates into groups when feeding. It will eat a wide range of food plants, depending on availability, including shrubs, pasture, agricultural crops, and native and exotic vegetation.

The ideal diet appears to involve browsing on shrubs and bushes, rather than grazing on grasses. There is evidence that the swamp wallaby is an opportunist taking advantage of food sources when they become available, such as fungi, bark and algae. There is also one reported case of the consumption of carrion.